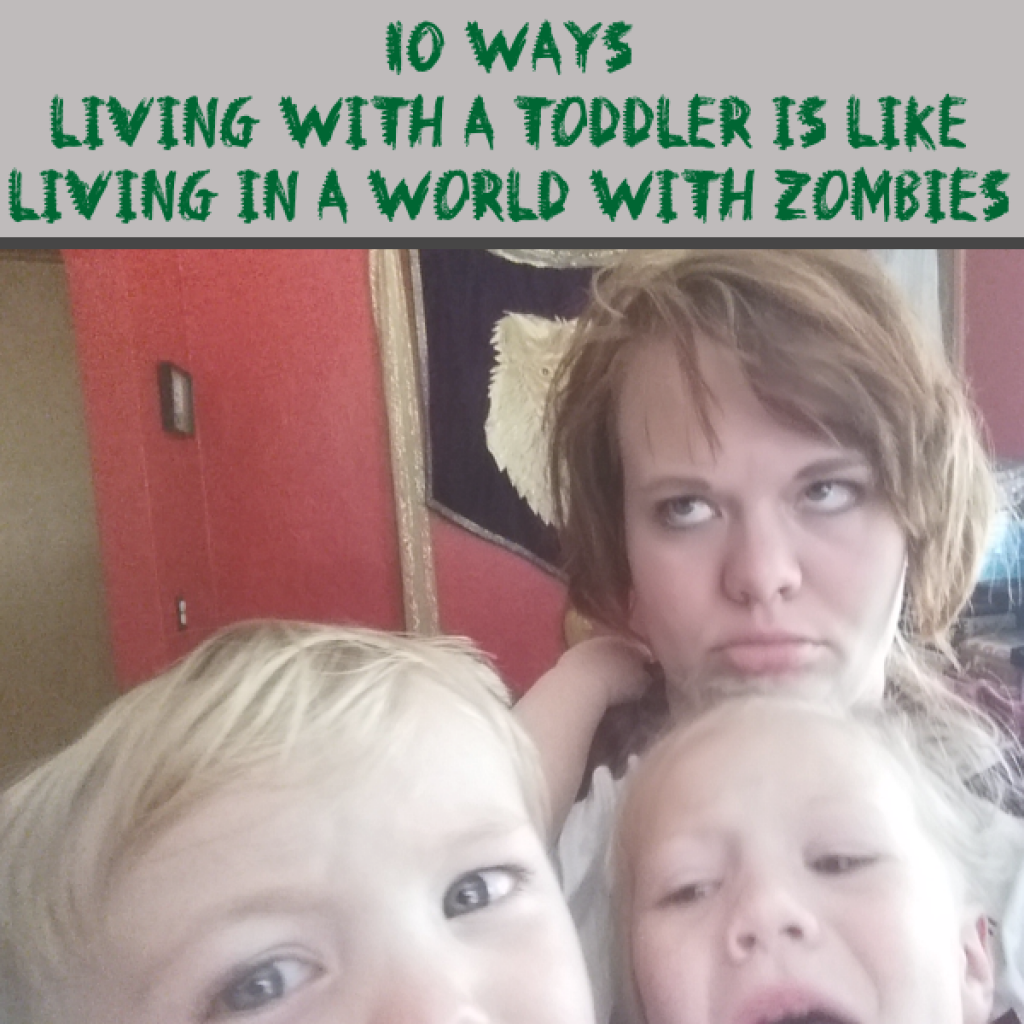 Last week I explained how toddlers are similar to zombies (specifically The Walking Dead zombies as I am not an expert on any of the others depicted). Today, I want to discuss how parenting a toddler is like trying to make it out alive during a zombie apocalypse because let’s face it, parenting a toddler is scary, gross, and downright hard.

1. Remember your dreams of a perfect world? Remember how that all came crashing down when your sweet, adorable baby turned into a toddler? Yeah, me too. I put it on the same level as Rick Grimes waking up from a coma and having to discover on his own that the zombie apocalypse was upon him. Feelings of terror, grief, and desperation are common in both scenarios.

2. Even with those not-so-fun feelings, parents will do anything for their kids because they realize that they are special and family is hard to come by. Parents will fight tooth and nail to protect their families, just like the familial groups that appear in The Walking Dead.

3. Most activity takes place during the day but at least one person is always awake at night. Sure, it is wise to have someone take watch at nightfall during the zombie apocalypse but why do toddlers feel that they need to take the night watch?

4. Food is hard to come by. I was moved with The Walking Dead episode where the group is so desperate for food that they kill and eat dog meat. Many of the people struggled with that decision but others realized they had to eat. Parents of toddlers can relate. We’ll take food where we can get it. Cold, half-eaten hotdog that has been laying on the floor for hours? Hey, I wouldn’t want it to go to waste.

5. Cleanliness is terrific but it just isn’t happening as often as you would like. People wandering through a world of zombies are not particularly focused on when they will get their next shower, they are focusing on survival. Try showering with a toddler around and you might become just as consumed with survival and showers will slowly creep to the bottom of your to-do list.

6. Ever feel like a trip around the block with a toddler could kill you? Although those who go on supply runs in The Walking Dead literally risk their lives going down the road, parents can be just as on alert (and exhausted) as those people.

7. Things that used to be dreaded or avoided become luxuries. Dentists appointments, grocery shopping, getting the oil changed – these are now mini vacations for parents that are able to do these things by themselves. The fact that The Walking Dead group gladly called a prison their home is a prime example of this idea. It was like a vacation for them to be able to lock themselves into prison cells.

8. We all believed in a safe haven for all only to be terribly mistaken. Parents of toddlers’ Terminus may be the zoo, or an amusement park, maybe even a play date with another toddler and their parent. We have high hopes for these occasions, imagining laughter, smiles, and pure excitement only to be greeted with tears, tantrums, and bad behavior. Even worse is to be surrounded by hot, sweaty, cranky toddlers that aren’t even your own. It can feel exactly like Terminus; like you are being eaten alive.

9. The recurring problem (other than zombies) that keeps hitting The Walking Dead family in the face is that people tend to be more dangerous than the walkers. The same seems to be true when parents think that other adults will be better to be around than their toddlers. Very rarely is this the case. Parents tend to return home more stressed than if they had been with their kids the whole time. It just doesn’t seem fair.

10. There is no status for parents or those in the zombie apocalypse. It doesn’t matter what you do, what you don’t do, what you have done in the past – all that matters is right now and what you will do to survive. It is these circumstances that will define you and bring out who you truly are.

Do you feel like you are living in a different world when parenting a toddler? I assume that we will never have a zombie apocalypse but if we do, I think parents of toddlers will be one step ahead.

Do you have more to add? We would love to hear your opinions!