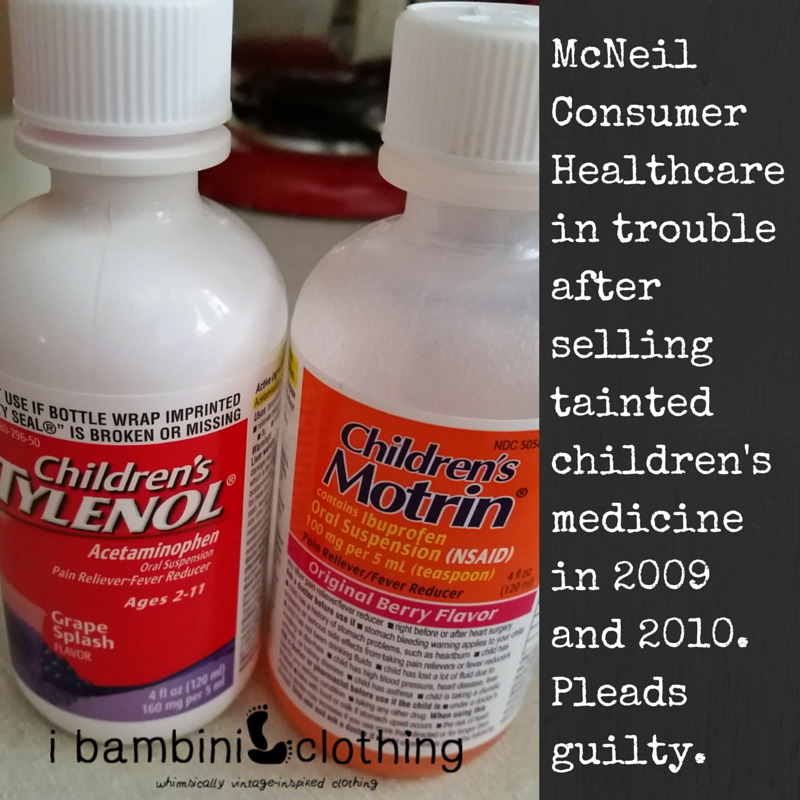 Back in 2010, McNeil Consumer Healthcare, a smaller division of Johnson & Johnson, issued a voluntary recall for their Infants’ and Children’s Tylenol and Children’s Motrin. Metal particles that included nickel, iron, and chormium were found in the bottles being sold for children. The Philadelphia plant that produced the contaminated medicine was shut down, torn down, and rebuilt but has yet to open its doors again.

The first complaint about the medicine came in May of 2009, when a consumer found black specks in the container they were using. The company still continued to produce the bottles for several months after the complaint came in. Today, McNeil Consumer Healthcare plead guilty to knowingly selling contaminated bottles of painkillers for children. They will pay $25 million to resolve the case against them.

According to their website, they are committed to providing “top quality” healthcare products.

McNeil seem to have corrected the problem but because they are a subsidiary of Johnson & Johnson, it has become even more worrisome for consumers. Johnson & Johnson have had other pharmaceutical recalls with other subsidiaries since 2009. It is important for consumers to stay up to date on any issues that may arise with the products they are taking and especially the products they are giving to their children.

I didn’t have children back in 2009 and 2010, so this issue wasn’t even on my radar. Now, as a parent of two and a buyer of Infant’s and Children’s Tylenol and Children’s Motrin, I was alarmed at reading this information. However, after digging a little deeper, it is made clear that the location that was producing these contaminated bottles wasn’t just “cleaned” but was shut down and torn down. The company also didn’t try to deny any of it but plead guilty and is paying a hefty price for it. They are trying to show how they will not be flippant about the situation and will do whatever it takes to make sure their quality is top-notch. Mistakes are made, and yes, it is even scarier when mistakes are made with products we give to our children, but extreme measures have been taken to show consumers we can trust them again.

It is still important to stay updated with what is happening with our children’s medicines. Parents need to be researching as well as inspecting the items we currently have on our shelves. Follow these steps to help insure painkillers are safe for your children to consume.

1. Inspect the box before purchasing. If the box is tampered with, choose a different one.
2. Look over the bottle of medicine. Make sure it is free of holes and dents.
3. Ensure that the bottle has never been opened and if it has, toss it.
4. Squeeze some of the liquid out and check for anything unfamiliar. If anything is spotted, take pictures and keep the bottle but do not use it. Send pictures and a complaint to the company who makes the product.
5. Double check dosing information before giving to your child.

If you have any recall questions, consult the FDA website for an updated list of recalled medicines. Stay connected and informed.

back to school time!!!