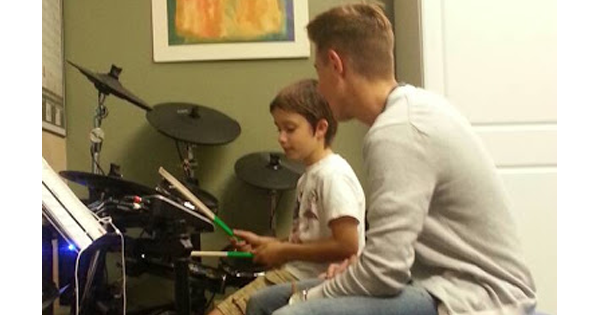 And so it begins…My son had his first drum lesson this week and he LOVED it!!

He doesn’t have a drum set but he’s got some supercool drumsticks with green handles (I have no idea whether they are good sticks or not, but they looked cool and were his favorite color).  His teacher is very young but has been playing for years and connected pretty well with my son.  He started out by asking Jadon what kind of music he liked. My child thinks about it for a minute and then says “Oh…you know…TransSiberian Orchestra type of things…so, pretty much rock” (he’s so cute!!). When asked what made him want to learn to play the drums…”playing Lego Rockband!”  was of course his answer! 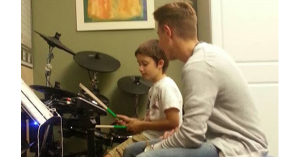 This lesson, he learned the correct way to hold the sticks and how to hold his hand and move his wrist while drumming. He also learned a simple…I’m not sure what the right word would be…beat? routine? It was a pattern with a count of 4 and each beat he did something different. My child is a HUGE fan of patterns, so this was right up his alley. So on the first beat, he would hit the bass and the Hi-Hat (one of the cymbals). The second was just the Hi-Hat. The third was the Hi-Hat and the snare. And the fourth was the Hi-Hat by itself again.

His teacher would sometimes demonstrate a technique and he would spin the sticks around in his hand while he was talking and before he would strike, which I have to admit looked very cool. And if my son had a thought bubble over his head, it would have been saying “OOOTHAT’STHECOOLESTTHINGIBETICOULDDOTHAT!!!” (and yes, it would be all excited and in one big long run-on sentence!) 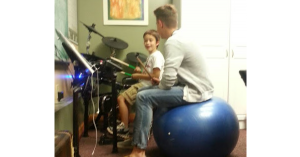 So I would declare his first drum lesson an unqualified success!! He is soooo excited for next week and his next lesson!!

And what made it all worth it for me was the super-sweet smile he would shoot my way whenever we made eye contact. I would do just about anything to see that smile on his face!

My Friend the Chickpea