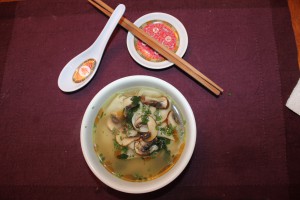 A couple of years ago a friend of mine found this amazing recipe for wonton soup. I had always ordered wonton soup when I’d go to PF Changs, but up until then had never thought about making it myself. My friend and I decided we should make it together…and by ‘together’ I mean we decided to make it on the same day, since at the time she lived in Italy and I lived in Missouri 😉 .

My son was in Kindergarten then and was super excited to help me…and even more excited to eat it! He LOVED it! It was very tasty…and I loved that we made it together, laughing and having fun. The only thing missing was my hubby. He was deployed at the time (he was in the Air Force), which was actually why we got to make the soup in the first place. He is the picky-est man alive and would have turned up his nose at our soup!

Well, hubby-man went out of town for a few days this week so my son and I decided it was time to try our hand at wonton soup again. I pulled out the recipe and it was just as good as before! My son was very proud of the fact that he could roll up the wontons and declared our soup to be even better than last time! 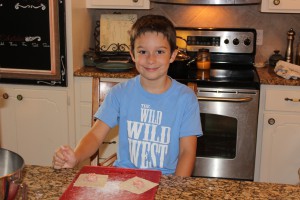 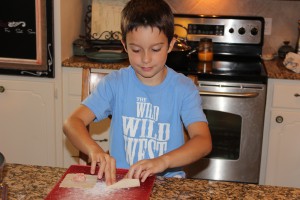 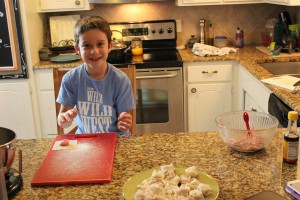 If you would like to try  making wonton soup, here’s the recipe I use:

Mix all the ingredients and then put 1 tsp of the mix in the middle of a wonton wrapper. Fold into a little purse and then steam for about 10 minutes. This makes a LOT of wontons! They freeze really well though, so what I do is decide how many I need to for my soup that night and then freeze the rest for later.

For the soup, the amounts vary and you have to adjust them to your needs. I use:

Bring chicken broth, salt and white pepper to a simmer. Add wontons, mushrooms and spinach, then let simmer for 3-5 minutes. Ladle into bowls and top with a sprinkling of chopped cilantro and a drizzle of sesame oil…YUM!! 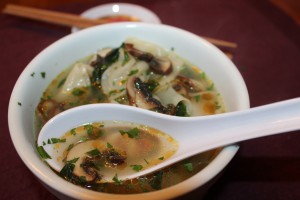 Here is the original recipe: